The Idea of IKEA

For a good example of the five unconventional acts of coherent leadership, consider the story of IKEA, the world’s largest furniture manufacturer and retailer. The identity of this enterprise is embodied in two simple statements. The first lays out its value proposition, which founder Ingvar Kamprad articulated this way in the mid-1950s: “to create a better everyday life for the many people.”

The second statement embodying the identity of this enterprise is a succinct reference to the way IKEA involves customers in its operating model: “You do your part. We do our part. Together, we save money.” Each store, for example, is laid out so that customers pick up their furniture from the warehouse and assemble it at home.

From its earliest years, IKEA has devoted itself to building and managing this identity. Kamprad started the enterprise as a college-age entrepreneur in 1943, selling seeds, postcards, and stationery. In the 1950s, he realized that furniture in Sweden was so expensive that many people, especially those moving into their first home, could not afford it. Part of the expense came from an elaborate system of middle merchants that bought and distributed furniture. From that moment, Kamprad’s company, IKEA, would give people low-cost style at home.

Kamprad demonstrated his commitment to this identity when he began buying furniture direct from manufacturers, bypassing distributors to reduce the prices paid by customers. When Swedish industry leaders saw the threat he posed, they tried to prevent their suppliers from selling to him. So he moved on to producers in low-cost Eastern Europe, where manufacturers could customize the product to his needs and give him an even better price.

The first IKEA retail store opened in Älmhult, a Swedish village, in 1958. Kamprad and his staff began to put a great deal of time and thought into translating the strategic into the everyday: designing and building capabilities that set IKEA’s retail stores apart. For example, the company began explicitly creating a capability in consumer insight, learning how IKEA’s customers lived, how they aspired to live, and what frustrated them about their current living situation. Kamprad became known for walking up to shoppers in IKEA stores and asking, “How did we disappoint you today?” Today’s company-wide requirement that managers visit customers in their homes is a direct extension of this original practice.

As IKEA expanded around the world, it codified and standardized many practices, but it also purposefully reinforced its participative way of bringing capabilities to scale, and thus translated the strategic into everyday practice. IKEA is a place where managers routinely let their coworkers figure out new ways to do things, and it deliberately percolates the best of these ideas back up to the central organization. As Torbjörn Lööf, CEO of Inter IKEA Systems B.V. (which manages the worldwide store franchise system and the “IKEA concept,” the intellectual property shared by the full system), puts it: “Of course there are areas where we’re very strict and structured. But people don’t resist. They know [the IKEA concept] has been extensively tested, [and] they know we’re constantly trying out new things, and if they prove out to work, [those ideas] become part of the concept.”

IKEA is also known for its ability to cut costs to grow stronger. (See “Is Your Company Fit for Growth?” by Deniz Caglar, Jaya Pandrangi, and John Plansky, s+b, Summer 2012.) Its people look for cost-saving opportunities relentlessly in every way that doesn’t affect the quality of the merchandise, the customer experience in the stores, or the efficiency of operations. That frugality is reinforced by an annual moment of discipline: The company reduces prices by an average of 2 percent at the start of every fiscal year. “This means we always start with a minus,” says Peter Agnefjäll, president and CEO of the IKEA Group. “If our group turns over €27 billion [US$28.7 billion], we start with a minus of €500 million [US$532 million]. If we don’t do more, we’re going to lose.”

IKEA’s culture reinforces all these practices. “The glue, or the inner strength, of IKEA is the cultural part,” says former CEO Mikael Ohlsson. If you’re an IKEA manager, and you visibly waste resources or reprimand a subordinate for suggesting an idea, you’ll hear about it immediately, not just from your boss, but from everyone around you.

Finally, IKEA uses its global scale, and its status as the world’s largest home furnishings brand, to shape its future. For example, it purchases furniture in such large volumes that suppliers go to great lengths to meet IKEA’s specifications. Although the leaders of this enterprise are conscious of its enviable market position, they are careful not to become complacent. As Jesper Brodin, the range and supply manager for IKEA of Sweden, put it, “Our number one threat is not the markets or the European economy or the recession or anything like that. It is ourselves and our own capacity to transform and deliver.”

IKEA delivers value as a low-price player and experience provider. It creates “a better everyday life” at home for many people around the world – providing functional and stylish home furnishings at very low prices with a high level of quality, sustainability, and customer engagement.

Portfolio of Products and Services

Known for its flat-packed furniture and its self-pick, self-carry, and self-assemble model, IKEA sells affordable furniture and other home-oriented products. 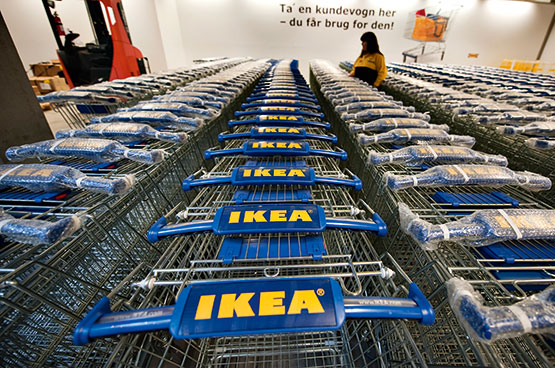 This article is adapted from Strategy That Works: How Winning Companies Close the Strategy-to-Execution Gap, by Paul Leinwand and Cesare Mainardi, with Art Kleiner (Harvard Business Review Press, 2016). For more information on related research, see strategyand.pwc.com/strategythatworks.

Paul Leinwand is global managing director of capabilities-driven strategy and growth for Strategy&, PwC’s strategy consulting business. Based in Chicago, he is a principal with PwC US, an adjunct professor of strategy at the Kellogg School of Management at Northwestern University, and a contributing editor of strategy+business.

Cesare Mainardi is an adjunct professor of strategy at the Kellogg School of Management and a member of the school’s global advisory board. He was previously CEO of Strategy& and, before that, of the global management consulting firm Booz & Company. He is one of the principal architects of the capabilities-driven strategy approach and a contributing editor of strategy+business.

Per-Ola Karlsson leads Strategy&’s activities in Dubai. He is a partner with PwC Middle East.

Marco Kesteloo leads the Strategy& retail team. He is a partner with PwC Netherlands.

We do not hold up the five unconventional acts as the only path to success. But it is the only path we know that provides this kind of longterm, sustainable success. It is also an appealing path that feels intrinsically rewarding. Even taking a few steps in this direction can boost a company’s energy and morale. To be sure, it requires you to have the courage of your convictions. You have to be discriminating and decisive, willing to say no to opportunities that don’t fit the strategy and persistent enough to bring the entire organization along for the ride. But it is not a leap into the unknown. There is a great deal of precedent, and you are in good company: Some of the most renowned, creative, and influential enterprises in the world keep moving forward along this path.